Goa’s tryst with history and heritage cannot be ignored. The Portuguese ruled Goa peacefully for 451 years and left behind their traces in the culture and architecture of Goa. The spectacular Baroque architecture displayed in the Goa’s churches adds dynamism and elegance to the natural beauty of this coastal state. So, don’t miss the beautiful churches of Goa on your next trip.

Goa is most popular location for beaches and parties. But you can not ignore the architectural beauty of churches in Goa. The historical churches in Goa is built by the Portuguese who ruled Goa long back and there architecture is breathtaking.

Location: Basilica of Bom Jesus is located in the Bainguinim village, Old Goa, which is 11.5 km from Panaji city.

Interesting Facts: This church holds the mortal remains of St. Francis Xavier. Its construction began in 1594 and was completed in 1605. The archbishop Dom Fr. Aleixo de Menezes consecrated this church in May 1605. It is the only church in Goa without the plaster coating. An over-zealous Portuguese conservationist removed this coating in 1950. Its Baroque architecture combines the Doric, Ionic and Corinthian designs.

Transportation: This church is 20 minutes from Panaji city via cab. You may also avail a taxi from Dabolim Airport (24 km). 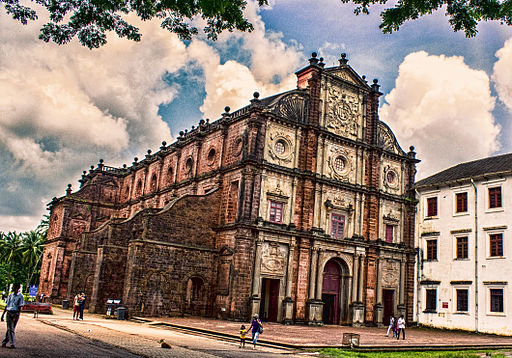 Location: The Sé Catedral de Santa Catarina is located in Velha, Old Goa, on the banks of Mandovi River.

Interesting Facts: This church was built to commemorate the victory of Alfonso Albuquerque on the feast of St. Catherine of Alexandria. Its construction began in 1562 and ended in 1619. It received its consecration in 1640. This church is regarded as Cathedral of the Archbishop of Goa. It has the Cross of Miracles. The vision of Christ was witnessed on this cross in 1919.

Transportation: You may avail a ferry service across Mandovi River or rent a cab from Panaji (9 km). 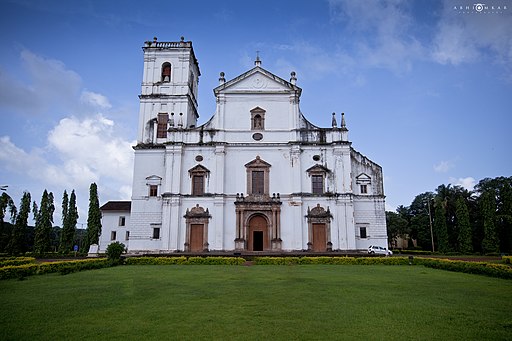 Location: The Church of St. Francis of Assisi is located in Velha, Old Goa off the National Highway 4. It is located west from the Se Cathedral Church.

Interesting Facts: The elegant design of this Church attests to the flawless combination of Portuguese-Manueline style portal and Tuscan-style architecture. This church was built in 1661 and renovated in 1665. It is the Old Palace of the Archbishop. Its adjoining convent was later converted into an Archaeological Museum. Its three-tier facade with octagonal towers has statue of St. Michael in the middle.

Transportation: You may come from Kadamba Bus Stand of Panaji (9.2 km) or Vasco Da Gama train-station (27 km) via bus or cab.

Church of Our Lady of the Immaculate Conception

Location: Church of Our Lady of the Immaculate Conception is located near the Municipal Gardens of Panjim.

Interesting Facts: A chapel was originally built in this location to serve the religious needs of Portuguese sailors. The large Baroque-style church replaced this chapel in 1609. The zig-zag patterned symmetrical stairways was built in 18th century. A large bell from Augustinian Monastery is kept in its tall belfry.
Transportation: You may come from Dabolim airport (13 km) or Thivim railway station (15 km) via bus or taxi. 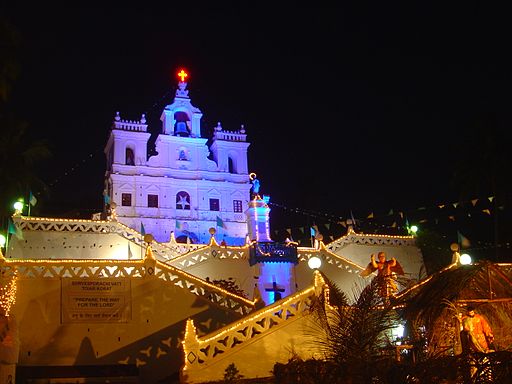 Location: The Chapel of St. Catherine is in Taleigao, which is 5 km from Panaji.

Interesting Facts: The Portuguese ‘governador’ Alfonso de Albuquerque originally constructed this church in 1510 to commemorate his victory against Adhil Shah of Bijapur. A mosque was originally present in its place. This church was rebuilt in 1952.

Transportation: You may come from Dabolim airport (15 km) or Thivim rail-station (14 km) via taxi or bus.

Location: The Church of St. Cajetan is located about half a kilometer, north-east of Se Cathedral in Old Goa.

Interesting Facts: The Italian friars of Theatine order built this church in 1661. The main altar is dedicated to Our Lady of Divine Providence. This church displays Corinthian architecture and has two turrets.

Transportation: You may come from Dabolim airport (16 km) or Thivim train-station (14 km) via taxi or bus.

Location: The Chapel of Our Lady of Mercy is resting atop the Monte Hill of Margao.

Interesting Facts: This pristine white chapel symbolizes the sorrows of mother Mary. The crucifixion of Jesus Christ is enacted in this church on Good Friday. This chapel performs the candle lit midnight mass of Christmas.

Transportation: You may take a cab or bus from Dabolim Airport (17 km) or Madgaon rail-station (1 km).

Church of Lady of Rosary, Goa

Location: Church of Lady of Rosary is resting atop the Monte Santo/Holy Hill of Old Goa.

Transportation: You may reach this church easily from Panaji (12 km) or Madgaon rail-station (2 km) via taxi or bus.

Interesting Facts: The village communities built the present-day building of this church with donations in 1741. Its towers were erected in 1765. It was entrusted to Diocesan clergy in 1767. Its main sanctuary was re-built in 1916. It has seven altars and Indian-style “cupola falsa.”

Transportation: You may hire a cab from either Madgaon rail-station (6 km) or Dabolim airport (22 km).

Church of Our Lady of Miracles, Goa

Location: The Church of Our Lady of Miracles is located in Sanguem village of Goa, 600-metres east of Municipal Gardens and 2 km from Mapusa.

Interesting Facts: This church was originally founded in 1594 as a military chapel. This chapel is affiliated to Parish Church of Zambaulim. The Hindus and Christians celebrate the church’s annual feast together on 16th day of Easter.

Location: Chapel of St. Francis Xavier is located in Old Goa inside the College of St. Paul.

Interesting Facts: This chapel was re-dedicated to St. Francis Xavier after his canonization in 1622. The original church collapsed in 1570. The new building with Doric-style architecture was erected in 1884.

Interesting Facts: The church inherits its name from the Spanish saint Nossa Senhora. A widow named Ana Azvado built the original church in 1626. The original building collapsed in 1651 and was re-built in 1655.

Transportation: You may come from Kadamba bus-stand (5 km) of Panaji or Vasco Da Gama rail-station (30 km).